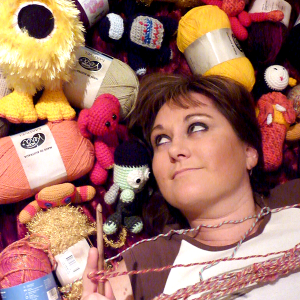 A monster is any fictional creature, usually found in legends or horror fiction, that is often hideous and may produce fear or physical harm by either its appearance or its actions. The word “monster” derives from Latin monstrum, an aberrant occurrence, usually biological, that was taken as a sign that something was wrong within the natural order. The word connotes something wrong or evil; a monster is generally morally objectionable, physically or psychologically hideous, and/or a freak of nature.

I never dreamt that when I grew up I would turn out be a Dr Frankenstein making monsters as a passion. All be it out of yarn and in the form of crochet.

2013 will be something of an anniversary for me. It will mark my 10th year of crochet addiction. As if to celebrate this milestone, I launch myself as a professional textile artist. There are so many exciting projects and adventures on my horizon. I definitely plan to enter a jumper as part of the Jumpers and Jazz in July festival. My tree has been booked and the planning for 2013 was underway as I was installing The Monsters up a tree jumper on the tree this year.

Also, I have been invited to exhibit as part of the Toowoomba Grammar School Art Show. This will be held March 23rd and 24th. One of the organisers visited my Monsters Under the Bed exhibition and loved it. I have started creating pieces and am about to embark on making many more in preparation.

Have you heard of the World of Wearable Art, or WoW as it is known? It is something of true wonder and amazement. My posse and I headed over to Wellington in September. Wello is the perfect venue. It’s beautiful, fun, easy to get about and the FOOD! And the CRAFT BEER! There are so many, many exceptionally well stocked beer bars to be discovered and sampled. If you are at all interested in fashion or costuming; or you don’t mind a Cirque du Soleil action, then truly “do yourself a favour”… My mind is awash and churning around ideas for an entry in the 2013 show. The sections have been announced and entry opens in December.

As if this wasn’t enough, I have just embarked on a magical journey of creativity. Sometimes life just leads you to where you are supposed to be.

Craft beer+crochet+monsters=match made in heaven

It’s quite nice to have a hook with a tasty IPA or Porter in hand. There is a craft beer bar in Brisbane named The Scratch. It just happens to be my favourite place. A few years ago now my posse and I gathered for a few ales at The Scratch on a now to be known as “fateful Saturday afternoon session”. I had made 4 pieces and a beer monster to “tag” in a yarnbomb. The pieces were beer themed and I think we got 3 attached to the tables before we were discovered. Happily, they were well received and remain in position several months later. You might even spot the Double Eye PA (IIPA) monster on the shelves behind the bar should you venture in for a tipple. The mission was fateful in that it turned out that one of the owners Benjamin just happens to have a monster penchant!! We have started on an adventure of the literary variety. Watch this space as we travel down the publishing path. It’s going to be a wonderful ride.